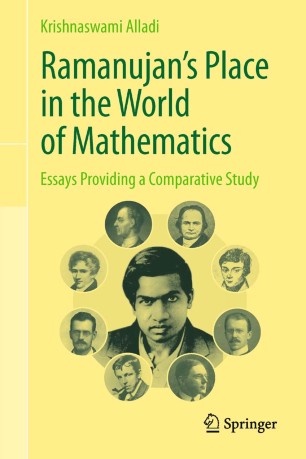 Ramanujan's Place in the World of Mathematics

This book is a collection of articles, all by the author, on the Indian mathematical genius Srinivasa Ramanujan as well as on some of the greatest mathematicians in history whose lives and works have things in common with Ramanujan. It presents a unique comparative study of Ramanujan’s spectacular discoveries and remarkable life with the monumental contributions of various mathematical luminaries, some of whom, like Ramanujan, overcame great difficulties in life. Also, among the articles are reviews of three important books on Ramanujan’s mathematics and life. In addition, some aspects of Ramanujan’s contributions, such as his remarkable formulae for the number π, his pathbreaking work in the theory of partitions, and his fundamental observations on quadratic forms, are discussed. Finally, the book describes various current efforts to ensure that the legacy of Ramanujan will be preserved and continue to thrive in the future. Thus the book is an enlightening study of Ramanujan as a mathematician and a human being.

From the Foreword by George Andrews—one of the greatest experts on Ramanujan's work: “Alladi, who has worked in several areas of number theory and analysis, and who, as editor of the Ramanujan Journal, is uniquely qualified to write these historical sketches which provide an unusual and compelling view of Ramanujan.”

Krishnaswami Alladi is professor of mathematics at the University of Florida, where he was the department chairman during 1998–2008. He received his PhD from the University of California, Los Angeles, in 1978. His research area is number theory, where he has made notable contributions. In 1987, during the Ramanujan Centennial in India, he got the inspiration to launch The Ramanujan Journal (now published by Springer), devoted to all areas of mathematics influenced by Ramanujan. He annually writes articles about Ramanujan and his place in the world of mathematics, for journals and newspapers. He is presently editor-in-chief of The Ramanujan Journal, editor of the book series Developments in Mathematics (Springer), and associate editor of Notices of the American Mathematical Society.