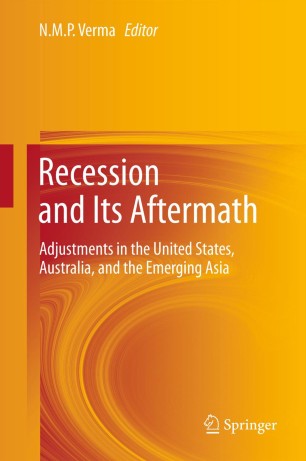 Recession and Its Aftermath

Adjustments in the United States, Australia, and the Emerging Asia

Market failure at medium intervals is inevitable in a capitalist economy. Such failures may not be seriously seen in the short run because market adjusts demand through hoarding of inventory or import of required goods and services. The market also adjusts demand in the long run through expansion of concerned industrial output and also by the entry of new firms. The crucial variable is price which also adjusts the commodity and the labor market. The problem comes when there are issues of overproduction, over capacity utilization of plants, over liquidation and excess supply of money, change in demand because of change in tastes and habits of consumers, households and the public. All these create knife edge disturbances in the economy. As a consequence they need adjustment through some variables such as employment and growth of population, saving propensity, technology, exhaustion of existing inventory, monetary and fiscal balancing. In this volume an attempt has been made to appraise the working of a market economy where short term disturbances may occur, market fails, recessionary cycle emerges and after certain fundamental measures the market recovers. Starting with a brief recent history of the crisis and the recession, discussions in this volume turn to how deliberations in macroeconomics yield implications for specific policies, some of which have been tried and others still to be tested.  Further in the volume we examine policies necessary for the regulation of the economic system and give a brief assessment of the extent to which global policy coordination has been discussed in policy circles even if not seriously practiced.

N.M.P. Verma is a senior Professor of Economics at Babasaheb Bhimrao Ambedkar University, Lucknow, India. He has a very long teaching and research career. He has specialized in the area of macro, industry, and development economics. He has authored many books and extensively contributed papers in professional peer reviewed journals of national and international repute. He is also on the editorial board of International Journal of Economics and Finance, Canada and International Journal of Economics and Business Modeling, Mumbai, India. He has done research for University Grants Commission, Government of India, Indian Council of Social Science Research, World Meteorological Organization, Geneva and other agencies. He has served on several coveted positions including Vice Chancellor of the University. He is also the recipient of ‘Rajiv Gandhi Excellence’ Award, ‘Bharat Jyoti’ Award and ‘Best Citizens of India’ Award.