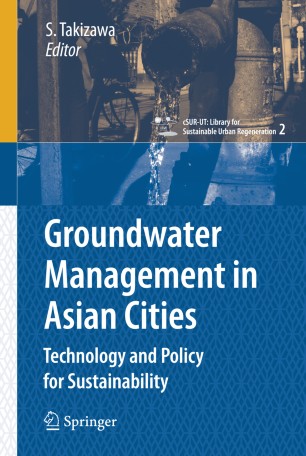 In 2007, the world's urban population surpassed the number of people living in rural areas and is still growing. The number of city dwellers who do not have access to piped water and rely on groundwater is also increasing. In many Asian cities, groundwater is not only the source of domestic water but also an important resource for industrial development, making better management of groundwater resources essential for sustainable development. Because groundwater is easier to access and costs less than water from piped systems, groundwater abstraction cannot be easily regulated. Policies for groundwater management adopted in Japan and other Asian countries are compared, and technologies for efficient use of groundwater are elucidated. Groundwater contamination is also a serious problem that exacerbates water scarcity in Asian cities. Case studies illustrate the cause and consequences of naturally occurring contaminants such as arsenic and fluoride, and groundwater contamination due to anthropogenic contaminants is described. Also discussed are technologies for treating contaminated groundwater to reduce the health risks of drinking contaminated groundwater.