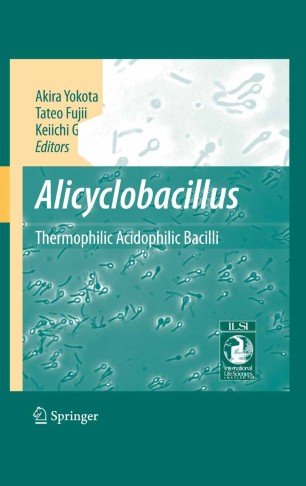 Soft drinks with pHs lower than 4. 0 are subjected to minimum pasteuri- tion at 65 °C for 10 min as required by the Japanese Food Sanitation Law. Not only pathogenic bacteria but most spore-forming bacteria are unable to grow at this low pH condition, and thus reports of microbial spoilage in pasteurized acidic soft drinks are rare. Since 1982, when the spoilage of aseptically packed apple juice was - tributed to a new type of acidophilic spore-forming bacteria in Germany, a succession of similar complaints regarding other fruit juice concentrates and their products has been received. In the beginning, the bacteria were classified in the genus Bacillus, but later, in 1992, the new genus Ali- clobacillus was proposed owing to their characteristic cellular membranes containing omega-alicyclic fatty acids. A group of Alicyclobacillus strains, responsible for the tainting of fruit juices, was then described as A. a- doterrestris in 1999. They are acidophilic and grow preferably at around pH 4. 0. They are thermophilic and grow better at temperatures above 40 °C. This indicates that we might have been missing them by our or- nary methods of bacterial detection at pH 7. 0 and 35 °C. Their spores are not inactivated by the pasteurizing conditions generally applied to juice concentrates and juice-containing beverages. Above all, because the bac- ria do not produce gas, consumers do not see any sign of spoilage until they open the product and notice its unpleasant taint.