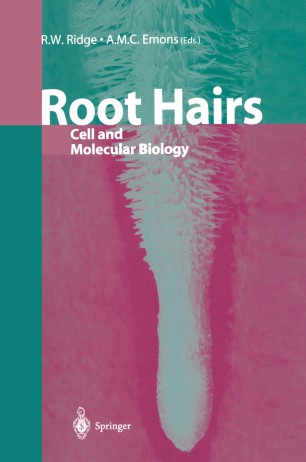 Root hairs are tip-growing cells that originate from epidennal cells called trichoblasts. Their role may be simply thought of as extending the surface area of the root to facilitate absorption of nutrients and water. However, as you will see in this book, the root hair is far more than that. To an increasingly larger number of plant biologists, the root hair is a model cell. It grows in much the same way as a pollen tube, by sending vast numbers of vesicles containing cell wall precursors to a rounded apical dome, the tip. Once the trichoblast becomes committed to root hair fonnation, it no longer divides. The root hair cell has a migrating nucleus and a complex cytoskeleton. It has a varied cell wall. It is easy to observe through differential interference contrast microscopy because there are no other cells around it to disturb the image. Cytoplasmic streaming is exceptionally clear, and amyloplasts and even mitochondria and endoplasmic reticulum can be seen without reporter labelling in some species. Root hair mutants are easy to distinguish and catalogue. Plant honnones are involved in their growth and development. It is thus an almost ideal plant cell for experimental manipulation and observation. The root hair is also involved in interactions with soil microbes, as you will learn from later chapters of the book.