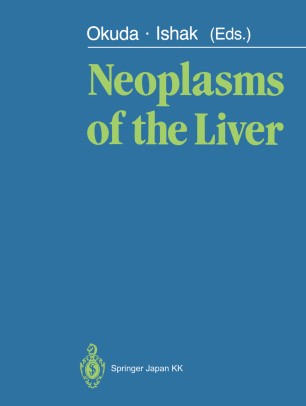 Neoplasms of the Liver

Primary liver cancer is a rather unusual malignancy in that the incidence varies tremendously from one geographical area to another. While relatively uncom­ mon in Western countries, it is the most prevalent malignant neoplasm in Southeast Asia, South Africa, and many other regions; in all, the countries in which primary liver cancer is very prevalent account for more than two-thirds of the world's population. In China alone, approximately 100 000 people die every year from primary liver cancer, mostly hepatocellular carcinoma. The incidence is rising in some countries, especially Japan, where it has doubled among males in the past 15 years or so, a staggering and puzzling trend. Since the demonstration of an etiological relationship between hepatitis B virus infection and hepatocellular carcinoma, intensive research has been con­ ducted in an effort to elucidate the role of the virus in hepatocarcinogenesis. Though much progress has been made, a full understanding of the molecular events leading to malignant transformation of the hepatocyte will probably require many more years of rigorous investigation. Chemical carcinogens and several industrial pollutants may also be involved in the etiopathogenesis of neoplastic liver disease.