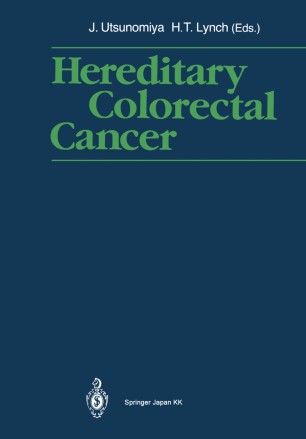 Since the success in chemical induction of cancer in rabbit's ear skin by K. Yamagiwa in 1915, oncologists of the world have come to believe that they can only solve their problems by means of animal experimen­ tation. The importance of environmental factors became moreevident in 1935 when T. Yoshida and T. Sasaki introduced azodye hepatocarcino­ genesis in rats. In the domain of the gastrointestinal tract, T. Sugimura has more recently accumulated enough evidence to indicate that locally active chemical mutagens are carcinogenic. In contrast, principal approaches to colorectal tumors have been quite different: emphasis has been placed on gene identification. Long before cancer of the large bowel was recognized, importance of the roles of adenomatosis coli and its familial occurrence attracted the attention of epidemiologists and geneticists. Morphological characteri­ zation and analysis of hereditary trends of human material have already bad a long history, and recently detailed analysis of genetic material has become feasible in the wake of rapid development in our knowledge of the oncoviruses, oncogenes, suppressor genes, chromosomal and DNA mapping, molecular mutation and so on. lt is true that in colorectal pathology, and in no other field, these areas of research have been explored more extensively and decisively. The identification of previ­ ously ill-defined lesions such as precancers and benign neoplasms have been improved because sequential changes can be observed in multiple samples spread over a wide area and followed up in due course.