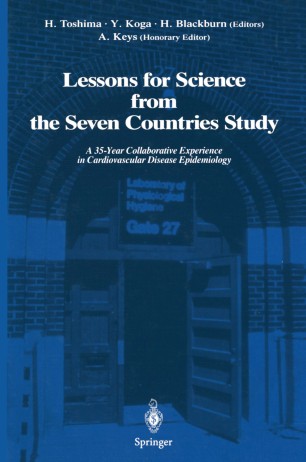 Lessons for Science from the Seven Countries Study

The Seven Countries Study has made central contributions to the under­ standing of the socio-cultural influences on population rates of cardiovascular diseases (CVD). It has pointed the way to preventive strategies for whole populations. The Study is unique as a long-term investigation, now in its 35th year. This pioneering work arose in part from a meeting between Professors Ancel Keys and Noboru Kimura to discuss differences observed in clinical mani­ festations and pathology of coronary disease in the U.S. and Japan. Professor Keys started explorations of the importance in these differences of dietary fat and serum cholesterol when he visited Japan in 1954, and thereafter initiated the Seven Countries Study to test these hypotheses. In the Japanese cohorts of the Study, it became evident from the outset that coronary artery disease was extremely rare, but its incidence has since increased along with dramatic lifestyle changes from traditional Japanese to western styles. The Japanese experience contrasts with a reduction in coronary artery disease in many western countries along with establishment of major preventive efforts in risk factor reduction and cardiac care.