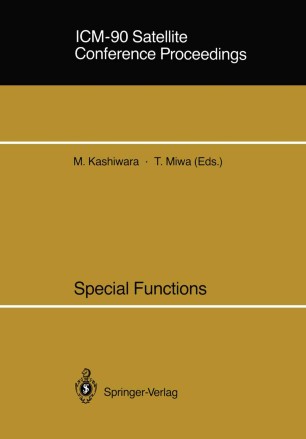 The 1990 Hayashibara Forum, "the International Conference on Special Functions", was held at Fujisaki Institute, Hayashibara Biochemical Laboratories, Inc., Okayama, Japan for five days (August 16-20, 1990). This volume is the proceedings for that meeting. On January 14,1985, Heisuke Hironaka and Ken Hayashibara, the president of Chair­ man, Board of Trustees, Hayashibara Foundation, met and decided to have an international conference on mathematics in the summer of 1990. This was pushed forward by Kiyosi Ito, who proposed "Special functions" as the theme of the conference. He also asked the present editors to join in the organizing committee of the Hayashibara Forum, 1990. On May 13, 1989 the organizing committee sent letters to major Japanese mathemat­ ical institutions asking their members to give suggestions about whom it should invite. Receiving the replies, the organizing committee decided the invited speakers, and sent invitation letters to them, in which it was written that "Special functions have been created and explored to describe scientific and mathematical phenomena. Trigonometric functions give the relation of angle to length. Riemann's zeta function was invented in order to describe the prime number distribution. Legendre's spherical functions and Bessel's functions were born in connection with the eigenvalue problems for partial differential equations.