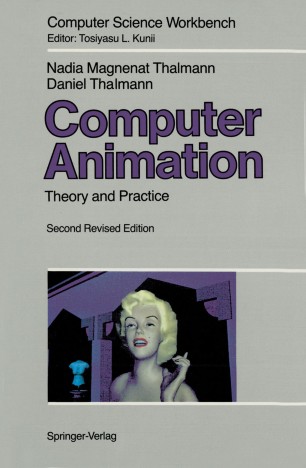 Computer Science Workbench is a monograph series which will provide you with an in-depth working knowledge of current developments in computer technology. Every volume in this series will deal with a topic of importance in computer science and elaborate on how you yourself can build systems related to the main theme. You will be able to develop a variety of systems, including computer software tools, computer gra­ phics, computer animation, database management systems, and compu­ ter-aided design and manufacturing systems. Computer Science Work­ bench represents an important new contribution in the field of practical computer technology. TOSIYASU L. KUNII Preface to the Second Edition Computer graphics is growing very rapidly; only computer animation grows faster. The first edition of the book Computer Animation: Theory and Practice was released in 1985. Four years later, computer animation has exploded. Conferences on computer animation have appeared and the topic is recognized in well-known journals as a leading theme. Computer-generated film festivals now exist in each country and several thousands of films are produced each year. From a commercial point of view, the computer animation market has grown considerably. TV logos are computer-made and more and more simulations use the technique of computer animation. What is the most fascinating is certainly the development of computer animation from a research point-of-view.