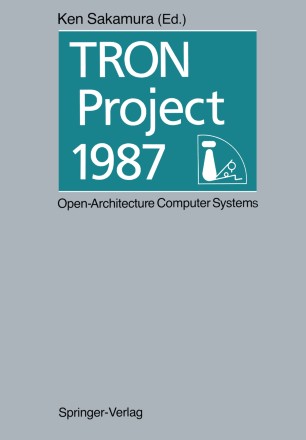 Almost 4 years have elapsed since Dr. Ken Sakamura of The University of Tokyo first proposed the TRON (the realtime operating system nucleus) concept and 18 months since the foundation of the TRON Association on 16 June 1986. Members of the Association from Japan and overseas currently exceed 80 corporations. The TRON concept, as advocated by Dr. Ken Sakamura, is concerned with the problem of interaction between man and the computer (the man-machine inter­ face), which had not previously been given a great deal of attention. Dr. Sakamura has gone back to basics to create a new and complete cultural environment relative to computers and envisage a role for computers which will truly benefit mankind. This concept has indeed caused a stir in the computer field. The scope of the research work involved was initially regarded as being so extensive and diverse that the completion of activities was scheduled for the 1990s. However, I am happy to note that the enthusiasm expressed by individuals and organizations both within and outside Japan has permitted acceleration of the research and development activities. It is to be hoped that the presentations of the Third TRON Project Symposium will further the progress toward the creation of a computer environment that will be compatible with the aspirations of mankind.