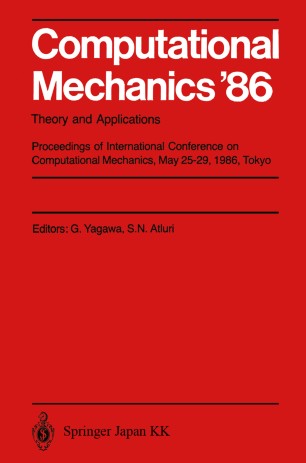 It is often said that these days there are too many conferences on general areas of computational mechanics. mechanics. and numer ical methods. vJhile this may be true. the his tory of scientific conferences is itself quite short. According to Abraham Pais (in "Subtle is the Lord ...• " Oxford University Press. 1982. p.80). the first international scientific conference ever held was the Karlsruhe Congress of Chemists. 3-5 September 1860 in Karlsruhe. Germany. There were 127 chemists in attendance. and the participants came from Austria. Belgium. France. Germany. Great Britain. Italy. Mexico. Poland. Russia. Spain. Sweden. and Switzerland. At the top of the agenda of the points to be discussed at this conference was the question: "Shall a difference be made between the expressions molecule and atom?" Pais goes on to note: "The conference did not at once succeed in bringing chemists closer together ... It is possible that the older men were offended by the impetuous behavior and imposing manner of the younger scientists" (see references cited in Pais' book). It may be observed that history. in general. repeats itself. However. at ICCM-86 in Tokyo. roughly 500 participants from both the West and the East were in attendance; there were only scholarly exchanges; the young tried to learn from the more experienced. and a spirit of international academic cooperation prevailed.