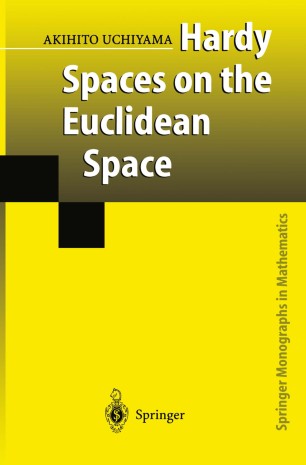 Hardy Spaces on the Euclidean Space

"Still waters run deep." This proverb expresses exactly how a mathematician Akihito Uchiyama and his works were. He was not celebrated except in the field of harmonic analysis, and indeed he never wanted that. He suddenly passed away in summer of 1997 at the age of 48. However, nowadays his contributions to the fields of harmonic analysis and real analysis are permeating through various fields of analysis deep and wide. One could write several papers explaining his contributions and how they have been absorbed into these fields, developed, and used in further breakthroughs. Peter W. Jones (Professor of Yale University) says in his special contribution to this book that Uchiyama's decomposition of BMO functions is considered to be the Mount Everest of Hardy space theory. This book is based on the draft, which the author Akihito Uchiyama had completed by 1990. It deals with the theory of real Hardy spaces on the n-dimensional Euclidean space. Here the author explains scrupulously some of important results on Hardy spaces by real-variable methods, in particular, the atomic decomposition of elements in Hardy spaces and his constructive proof of the Fefferman-Stein decomposition of BMO functions into the sum of a bounded?function and Riesz transforms of bounded functions.