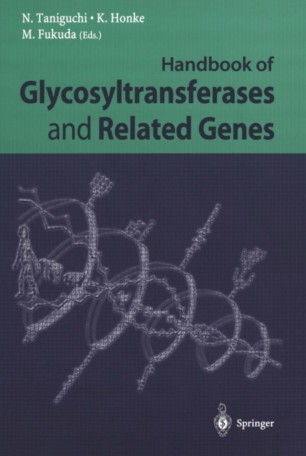 Handbook of Glycosyltransferases and Related Genes

The so-called postgenomic research era has now been launched, and the field of gly­ cobiology and glycotechnology has become one of the most important areas in life science because glycosylation is the most common post-translational modification reaction of proteins in vivo. On the basis of Swiss-Prot data, over 50% proteins are known to undergo glycosylation, but in fact the actual functions of most of the sugar chains in the glycoconjugates remain unknown. The complex carbohydrate chains of glycoproteins, glycolipids, and proteoglycans represent the secondary gene products formed through the reactions of glycosyl­ transferases. The regulation of the biosynthesis of sugar chains is under the control of the expression of glycosyltransferases, their substrate specificity, and their local­ ization in specific tissue sites. There is a growing body of evidence to suggest that these enzymes play pivotal roles in a variety of important cellular differentiation and developmental events, as well as in disease processes. Over 300 glycosyltransferases appear to exist in mammalian tissues. If the genes that have been purified and cloned from various species such as humans, cattle, pigs, rats and mice are counted as one, approximately 110 glycogenes that encode glycosyltransferases and related genes have been cloned at present, and this number continues to grow each day. However, most of the functions of the glycosyltransferase genes and related genes are unknown. This fact has stimulated numerous new and interesting approaches in molecular biologi­ cal investigations.