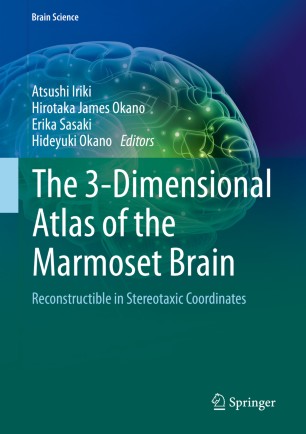 The 3-Dimensional Atlas of the Marmoset Brain

The common marmoset (Callithrix jacchus), a New World monkey, is increasingly becoming popular world-wide in a variety of biomedical studies as a primate model of human neuro-psychiatric and biological disorders, particularly through gene manipulation technologies. This book provides accurate, comprehensive, and convenient references from combined Nissl-stained sections and magnetic resonance (MR) images of the marmoset brain. The original volume-rendered digital models are web-accessible and freely rotatable in three dimensions using any coordinate system, and as such we expect them to be useful across disciplines and anatomical interests. The combined Nissl stained and MR images were obtained from the same marmoset, thus allowing cross-modality matched references for multiple uses. This book depicts 86 horizontal series of images along the neurosurgical plane (based on the actual data), with more accuracy and resolution than the web-based digital models. From this brain model, we reconstructed 32 Coronal Series and 10 Parasagittal Series of images along the neurosurgical plane. In addition, to fully utilize the freely rotatable nature of the brain model, this atlas depicts 3 omni-directionally sliced planes that best illustrate the visual, somatosensory, and motor projection systems across the neuraxis. These datasets comprise the fundamentals of the whole database of Japan’s national marmoset project (Brain/MINDS supported by MEXT and AMED, Japan), which is headed by one of the editors, Hideyuki Okano.