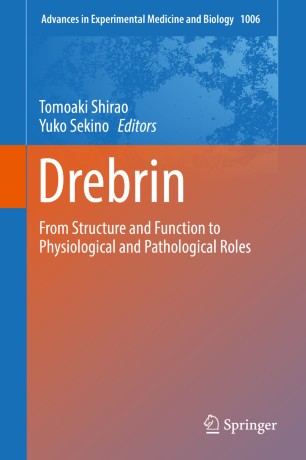 From Structure and Function to Physiological and Pathological Roles

Part of the Advances in Experimental Medicine and Biology book series (AEMB, volume 1006)

This book is the first comprehensive review of drebrin, which plays pivotal roles in various cellular events, via forming unique actin cytoskeletons, including synapse formation and in synaptic function. Particularly the loss of drebrin from dendritic spines is used as a marker of dementia in neurological disorders such as Alzheimer’s disease. Since drebrin was first identified by our group in 1985, many studies of drebrin have been done in various fields, including not only molecular biology, biophysics, cell biology, neuroscience, clinical studies, spermatogenesis, immunology, and cancer metastasis, but others as well. The structure of this book facilitates the understanding of the whole picture of studies on drebrin. The volume begins with a general introduction to drebrin, and then the chapters in the second part provide the basic knowledge for further understanding. The third part examines its function in the nervous system, and the fourth part discusses its function in the non-nervous system. This work will appeal to researchers who are interested in cytoskeletal dynamics at membrane-cytoskeletal interface as well as the number of them who use drebrin as a tool, such as a marker of synaptic function or a disease marker. This volume is kept as concise as possible in order to be understood by readers in diverse scientific disciplines.