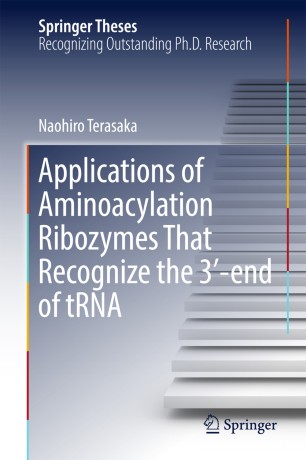 Applications of Aminoacylation Ribozymes That Recognize the 3′-end of tRNA

In this thesis, applications of aminoacylation ribozymes named flexizymes are described. Flexizymes have the following unique characteristics: (i) substrate RNA is recognized by two consecutive base pairs between the 3'-end of substrate RNA and the 3'-end of the flexizyme; (ii) these base pairs can be substituted with other base pairs; and (iii) various activated amino acids can be used as substrates including both canonical and noncanonical amino acids. This flexible aminoacylation of RNAs by flexizymes was used to label endogenous tRNAs to be removed, and in vitro selection using the tRNA-depleted library enabled the discovery of the novel interaction between the microRNA precursor and metabolites. Flexizymes are also used to prepare various aminoacyl-tRNAs bearing mutations at the 3'-end to engineer the translation machinery and to develop the orthogonal translation machinery.
The first part of the research demonstrated that SELEX is appropriate for discovering the interaction between small RNA and ligands, and suggested that more RNA motif binding to small molecules exists in small RNAs. The second part opened a door to new opportunities for in vitro synthetic biology involving the engineering of the genetic codes and translation machineries. This research also indicated the great potential of aminoacylation by flexizymes to be applied in various fields of RNA research, which is beneficial for RNA researchers.