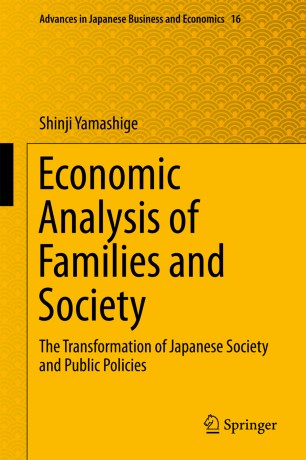 Economic Analysis of Families and Society

The Transformation of Japanese Society and Public Policies

Part of the Advances in Japanese Business and Economics book series (AJBE, volume 16)

This book, based on economics and game theory, analyzes the changes that Japan is now facing as a reflection of changes in Japanese families and society. The author presents a simple framework for the structural relationship among markets, communities including families, and the state; and uses it to explain the changes that have occurred in Japanese society. Social changes have created a series of social problems such as population ageing, poverty, and regional disparities, which require changes in public policies. The book provides readers with rich information about the Japanese social security system, social policies and regional policies by explaining why they are developed, how they are designed, and what challenges they face. Readers will find that the transformation of Japanese society is not really a special case but a fairly common one that many developed countries have experienced and many developing countries are going to experience. The book will be useful not only to those who are interested in Japanese society and public policies but also to anyone who is interested in the transformations of families, communities, and roles of the state in a modern market economy.