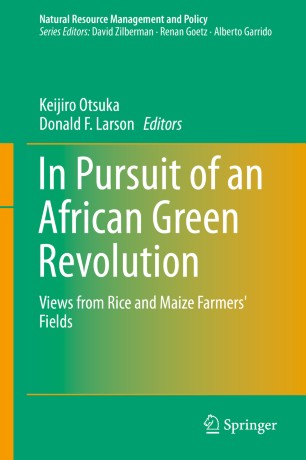 In Pursuit of an African Green Revolution

This book explores recent experiences in the effort to bring about a Green Revolution in Sub-Saharan Africa (SSA). The chapters focus on rice and maize, which are promising and strategic smallholder crops. Significantly, we find that an African Rice Revolution has already begun in many irrigated areas, using Asian-type modern varieties, chemical fertilizer, and improved management practices. Further, we find that the same technological package significantly increases the productivity and profitability of rice farming in rainfed areas as well. We also find evidence that that management training, when done well, can boost productivity on smallholder farms. This suggests that African governments can accelerate the pace of Africa’s Rice Revolution by strengthening extension capacity.

The story for maize is wholly different, where most farmers use local varieties, apply little chemical fertilizer, and obtain very low yields. However, in the highly populated highlands of Kenya, a number of farmers have adopted high-yielding hybrid maize varieties and chemical fertilizer, as was the case in  the Asian Green Revolution, apply manure produced by stall-fed cows, as was the case during the British Agricultural Revolution, and keep improved cows or cross-breeds from European cows and local stock, as was the case of the Indian White Revolution. We conclude that while rice in Africa has benefited from an Asian Green Revolution strategy that emphasizes modern seeds, inputs, and focused knowledge transfers, the success of Africa’s Maize Revolution will require a different system approach based on hybrid maize, chemical and organic fertilizers, and stall-fed cross-bred cows.

Editors Keijiro Otsuka is a professor of development economics at the National Graduate Institute for Policy Studies (GRIPS) in Tokyo. After receiving a Ph.D. in economics from the University Chicago in 1979 and working for the Economic Growth Center of Yale University as a post-doctoral fellow for one year, he served as an associate professor and a professor of economics at the Tokyo Metropolitan University until 2001, when he joined GRIPS, where he served as the director of the International Development Studies Program from 2003 to 2011. He was visiting scientist at the International Rice Research Institute (1986–1989), visiting research fellow at the International Food Policy Research Institute (1993–1998), and lead researcher at the World Bank (2011–2012). He was formerly chairman of the board of trustees of the International Rice Research Institute (2004–2007) and president of the International Association of Agricultural Economists (2009–2012). Currently he is chairman of the Oversight Committee of the Global Rice Science Partnership and an adviser to the Coalition for African Rice Development. He has been working extensively on the Green Revolution, land tenancy, property rights and natural resource management, cluster-based industrial development, and the poverty dynamics in Asia and Sub-Saharan Africa. His studies are primarily survey-based with comparative perspectives between Asia and Sub-Saharan Africa. He has conducted numerous surveys in Japan, Taiwan, China, Vietnam, Indonesia, Thailand, India, Nepal, Ghana, Côte d’Ivoire, Ethiopia, Kenya, Uganda, Tanzania and Malawi. He received the Purple Ribbon Medal from the Japanese government in 2010 and was selected as an Honorary Life Member of the International Association of Agricultural Economists in 2012, Fellow of the Agricultural and Applied Economics Association (formerly the American Agricultural Economics Association) in 2013, and a Distinguished Fellow of the African Association of Agricultural Economists in 2013. He is the author or coauthor of 113 articles in refereed international journals of development economics, agricultural economics, and environmental economics, and the coauthor or coeditor of 21 books (plus 8 Japanese books). Currently he is an editorial board member of Economic Development and Cultural Change, Agricultural Economics, and the Asian Development Review. Donald F. Larson is a senior economist in the Development Research Group at the World Bank. He joined the Bank while pursuing a Ph.D. in agricultural and resource economics at the University of Maryland, which he earned in 1995. Don also holds an M.A. in economics from Virginia Tech and a B.A. in economics from the College of William and Mary. Before coming to the Bank, Don worked for the United Nations Food and Agriculture Organization in Rome. With colleagues he has written or edited five books and has published in scholarly journals focused on rural development, carbon markets, natural resource management, and commodity risk management. He has worked with governments on policy issues in Africa, Asia, Europe, the Caribbean and Latin America. Don was also part of a World Bank team that launched the first climate finance fund, the Prototype Carbon Fund, in 1999.

“This volume is a collection of empirical studies from six countries in SSA … that carefully examines an important, but still unsolved issue: is a Green Revolution possible in SSA, and if so how? … it sheds new light on the role of management practices in enhancing food productivity, in sharp contrast to most existing literature. … I recommend this book to both researchers and policymakers to use as a reference in policy dialogue.” (The Developing Economies, Vol. 55 (3), September, 2017)
Buy options