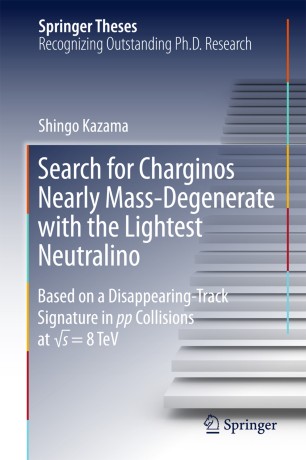 In this book, the anomaly mediated supersymmetry breaking (AMSB) model is explored by searching for charged winos with their subsequent decays collected with the ATLAS detector at the Large Hadron Collider (LHC).

The author develops a new method, called “re-tracking,” to detect charged winos that decay before reaching the Semiconductor Tracker (SCT) detector. Because the nominal tracking algorithm at the ATLAS experiment requires at least seven successive hits in the inner tracking system, the sensitivity to charged winos having a fraction of a nanosecond in the past analysis was therefore limited. However, re-tracking requires a minimum of three pixel hits and provides a fully efficient tracking capability for charged winos traversing the pixel detector, resulting in around about 100 times greater efficiency for charged winos with a lifetime ~0.2 ns longer than that in past searches.

ks, charged leptons, and tracks with mismeasured pT. A background estimation based on the Monte Carlo (MC) simulation suffers from large uncertainties due to poor statistics and has difficulty simulating the properties of background tracks. Therefore, a data-driven approach has been developed by the author of the book to estimate the background track-pT spectrum.

No significant excess above the background expectation is observed for candidate tracks with large transverse momentum, and constraints on the AMSB model are obtained. The author shows that in the AMSB model, a charged wino mass below 270 GeV is excluded at 95 % confidence level, which also directly constrains the mass of wino dark matter.