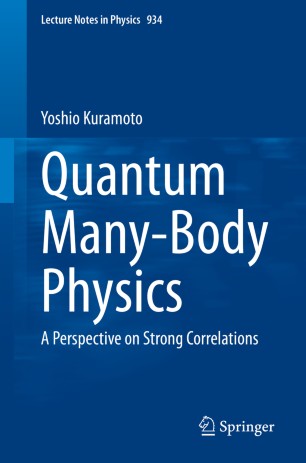 A Perspective on Strong Correlations

This book offers a compact tutorial on basic concepts and tools in quantum many-body physics, and focuses on the correlation effects produced by mutual interactions.

The content is divided into three parts, the first of which introduces readers to perturbation theory. It begins with the simplest examples—hydrogen and oxygen molecules—based on their effective Hamiltonians, and looks into basic properties of electrons in solids from the perspective of localized and itinerant limits. Readers will also learn about basic theoretical methods such as the linear response theory and Green functions. The second part focuses on mean-field theory for itinerant electrons, e.g. the Fermi liquid theory and superconductivity. Coulomb repulsion among electrons is addressed in the context of high-Tc superconductivity in cuprates and iron pnictides. A recent discovery concerning hydride superconductors is also briefly reviewed. In turn, the third part highlights quantum fluctuation effects beyond the mean-field picture. Discussing the dramatic renormalization effect in the Kondo physics, it provides a clear understanding of nonperturbative interaction effects. Further it introduces readers to fractionally charged quasi-particles in one and two dimensions. The last chapter addresses the dynamical mean field theory (DMFT).

The book is based on the author’s long years of experience as a lecturer and researcher. It also includes reviews of recent focus topics in condensed matter physics, enabling readers to not only grasp conventional condensed matter theories but also to catch up on the latest developments in the field.

Yoshio Kuramoto is a Professor at the KEK and Professor Emeritus at Tohoku University. His work chiefly involves condensed matter theory, and has particularly contributed to the construction of a theoretical scheme called the non-crossing approximation (NCA). He has also pioneered a scheme on dynamics of the Anderson lattice. He has lectured on many-particle physics at the Department of Physics, Tohoku University and at other universities for many years.