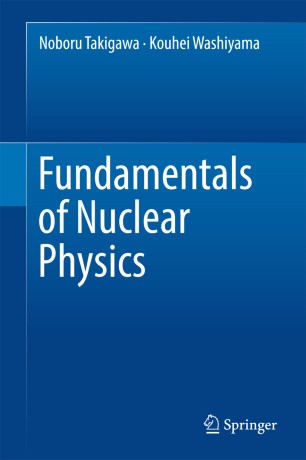 It primarily covers the structure of nuclei at low excitation in detail. It also examines nuclear forces and decay properties. In addition to fundamentals, the book treats several new research areas such as non-relativistic as well as relativistic Hartree–Fock calculations, the synthesis of super-heavy elements, the quantum chromodynamics phase diagram, and nucleosynthesis in stars, to convey to readers the flavor of current research frontiers in nuclear physics. The authors explain semi-classical arguments and derivation of its formulae. In these ways an intuitive understanding of complex nuclear phenomena is provided.

The book is aimed at graduate school students as well as junior and senior undergraduate students and postdoctoral fellows. It is also useful for researchers to update their knowledge of diverse fields of nuclear structure. The book explains how basic physics such as quantum mechanics and statistical physics, as well as basic physical mathematics, is used to describe nuclear phenomena. A number of questions are given from place to place as supplements to the text.

Kouhei Washiyama received his DSc in physics from Tohoku University in 2007, and thereafter worked as a postdoctoral researcher at Grand Accélérateur National d'Ions Lourds, Université Libre de Bruxelles, and RIKEN Nishina Center. He is currently a researcher at Center for Computational Sciences, University of Tsukuba.