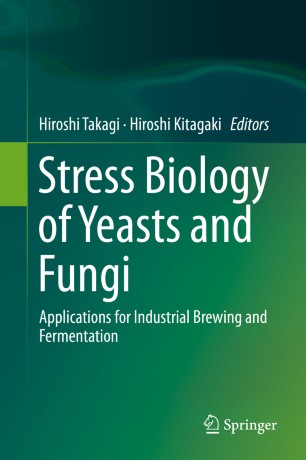 Stress Biology of Yeasts and Fungi

Applications for Industrial Brewing and Fermentation

This book describes cutting-edge science and technology of the characterization, breeding, and development of yeasts and fungi used worldwide in fermentation industries such as alcohol beverage brewing, bread making, and bioethanol production. The book also covers numerous topics and important areas the previous literature has missed, ranging widely from molecular mechanisms to biotechnological applications related to stress response/tolerance of yeasts and fungi. During fermentation processes, cells of yeast and fungus, mostly Saccharomyces and Aspergillus oryzae spp., respectively, are exposed to a variety of fermentation “stresses”. Such stresses lead to growth inhibition or cell death. Under severe stress conditions, their fermentation ability and enzyme productivity are rather limited. Therefore, in terms of industrial application, stress tolerance is the key characteristic for yeast and fungal cells. The first part of this book provides stress response/tolerance mechanisms of yeast used for the production of sake, beer, wine, bread, and bioethanol. The second part covers stress response/tolerance mechanisms of fungi during environmental changes and biological processes of industrial fermentation. Readers benefit nicely from the novel understandings and methodologies of these industrial microbes. The book is suitable for both academic scientists and graduate-level students specialized in applied microbiology and biochemistry and biotechnology and for industrial researchers and engineers who are involved in fermentation-based technologies.

The fundamental studies described in this book can be applied to the breeding of useful microbes (yeasts, fungi), the production of valuable compounds (ethanol, CO2, amino acids, organic acids, and enzymes) and the development of promising processes to solve environmental issues (bioethanol, biorefinery).