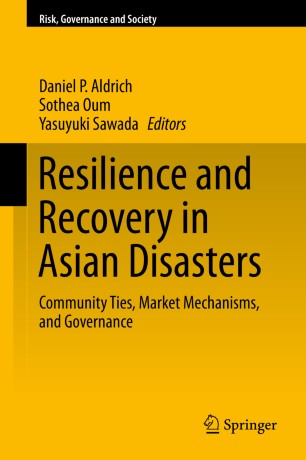 Resilience and Recovery in Asian Disasters

This book establishes a new, holistic framework for disaster recovery and mitigation, providing a multidisciplinary perspective on the field of risk management strategies and societal and communal resilience. Going beyond narrow approaches that are all too prevalent in the field, this work builds on an optimum combination of community-level networks, private market mechanisms, and state-based assistance strategies. Its chapters describe best practices in the field and elucidate cutting-edge research on recovery, highlighting the interaction between government, industry, and civil society. The book uses new data from a number of recent disasters across southeast and east Asia to understand the interactions among residents, the state, and catastrophe, drawing on events in Malaysia, Vietnam, Cambodia, Japan, China, and Thailand. Grounded in theories of risk mitigation and empirical research, the book provides practical guidance for decision makers along with future research directions for scholars.

The Asian region is highly prone to natural disasters which devastate large and mostly poor populations. This book deals with some of the root issues underlying the continued vulnerability of these societies to catastrophic shocks. The book is unusual in that it comprehensively covers resilience and fragilities from community levels to market mechanisms and governance and it analyses these issues in very different economic and structural settings. Recommended for development and disaster risk managers—without question.

Daniel P. Aldrich is an associate professor and university scholar in the Department of Political Science at Purdue University. Aldrich was a Fulbright research fellow at the University of Tokyo’s Economics Department for the academic year 2012–2013 and an American Association for the Advancement of Science fellow at USAID from 2011–2012. He has been a visiting Abe scholar at the University of Tokyo’s Law Faculty in Japan, an advanced research fellow at Harvard University’s Program on US–Japan Relations, a visiting researcher at Centre Américain, Sciences Po in Paris, France and a visiting professor at the Tata Institute for Disaster Management in Mumbai, India. He is a board member of the journals Asian Politics and Policy and Risk, Hazards and Crisis in Public Policy, and is a Mansfield U.S. Japan Network for the Future alumnus. He is the section organizer for the American Political Science Association’s Disasters and Crises Related Group. Aldrich received his Ph.D. and M.A. in political science from Harvard University, an M.A. from the University of California at Berkeley and his B.A. from the University of North Carolina at Chapel Hill.

Sothea Oum is an economist at the Economic Research Institute for ASEAN and East Asia (ERIA) Jakarta, Indonesia. He joined ERIA in 2009 as an associate researcher after completing his Ph.D. in economics, specialized in computable general equilibrium (CGE) modeling, from Monash University, Australia, on full scholarships. At ERIA, he manages region-wide research projects on ASEAN and East Asian integration and community building process, small and medium enterprises (SMEs), social protection, disaster management, income distribution and poverty. He also holds an M.A in economics from Kobe University, Japan and a B.A from the National Economics University, Hanoi, Viet Nam, both on full scholarships from the governments of Japan and Vietnam, respectively.

Yasuyuki Sawada is a professor in the Faculty of Economics at the University of Tokyo. He also has been a visiting researcher of the JICA Research Institute of Japan International Cooperation Agency (JICA); faculty fellow of the Research Institute of Economy, Trade, and Industry (RIETI) and visiting fellow at the Asian Development Bank Institute (ADBI). He was a visiting professor at Stanford University in 2012 and a visiting fellow at the Bangladesh Institute of Development Studies (2012–2013) and BRAC (2011–2012). His research interests include econometric investigations of individual, household and firm behaviors under risks using micro-data from developing and developed countries such as China, India, Pakistan, the Philippines, Sri Lanka, Vietnam and Japan. Sawada completed his M.A. in food research and a Ph.D. in economics from Stanford University in 1996 and 1999, respectively and a B.A from Keio University, Japan. He is also a recipient of the 2013 Nikkei Book Award; the 2011 Ishikawa Prize of the Japanese Economic Association; the 2010 Kiyoshi Kojima Prize of the Japanese International Economic Association; the 2009 Enjoji Jiro Prize and the Masayoshi Ohira Memorial Prize. He is a co-editor of The Japanese Economic Review.