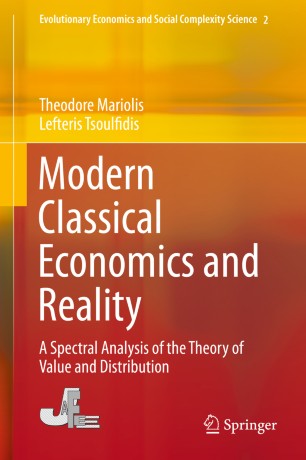 A Spectral Analysis of the Theory of Value and Distribution

This book presents an in-depth, novel, and mathematically rigorous treatment of the modern classical theory of value based on the spectral analysis of the price–profit–wage rate system. The classical theory is also subjected to empirical testing to show its logical consistency and explanatory content with respect to observed phenomena and key economic policy issues related to various multiplier processes. In this context, there is an examination of the trajectories of relative prices when the distributive variables change, both theoretically and empirically, using actual input–output data from a number of quite divers

e economies. It is suggested that the actual economies do not behave like the parable of a one-commodity world of the traditional neoclassical theory, which theorizes the relative scarcities of “goods and production factors” as the fundamental determinants of relative prices and their movement. By contrast, the results of the empirical analysis are fully consistent with the modern classical theory, which makes the intersectoral structure of production and the way in which net output is distributed amongst its claimants the fundamental determinants of price magnitudes. At the same time, however, these results indicate that only a few vertically integrated industries (“industry core” or “hyper-basic industries”) are enough to shape the behaviour of the entire economy in the case of a disturbance. This fact is reduced to the skew distribution of the eigenvalues of the matrices of vertically integrated technical coefficients and reveals that, across countries and over time, the effective dimensions of actual economies are surprisingly low. Normal 0 false false false EN-US JA X-NONE />