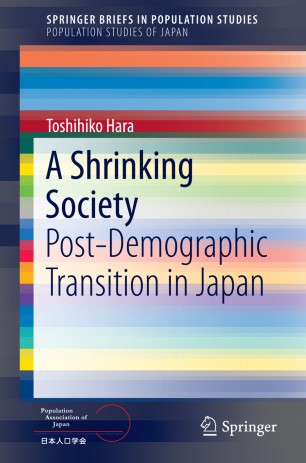 This is the book to focus on a new phenomenon emerging in the twenty-first century: the rapidly aging and decreasing population of a well-developed country, namely, Japan. The meaning of this phenomenon has been successfully clarified as the possible historical consequence of the demographic transition from high birth and death rates to low ones. Japan has entered the post-demographic transitional phase and will be the fastest-shrinking society in the world, leading other Asian countries that are experiencing the same drastic changes. The author used the historical statistics, compiled by the Statistic Bureau, Ministry of Internal Affairs and Communications in 2006 and population projections for released in 2012 by the National Institute of Population and Social Security Research, to show the past and future development of the dependency ratio from 1891 to 2060. Then, utilizing the population life table and net reproduction rate, the effects of increasing life expectancy and declining fertility on the dependency ratio were observed separately. Finally, the historical relationships among women’s survival rates at reproductive age, the theoretical fertility rate to maintain the replacement level and the recorded total fertility rate (TFR) were analyzed. Historical observation showed TFR adapting to the theoretical level of fertility with a certain time lag and corresponding to women’s survival rates at reproductive age. Women’s increasing lifespan and survival rates could have influenced decision making to minimize the risk of childbearing. Even if the theoretical fertility rate meets the replacement level, women’s views of minimizing the risk may remain unchanged because for women the cost–benefit imbalance in childbearing is still too high in Japan. Based on the findings, the author discusses the sustainability of Japanese society in relation to national finances, social security reform, family policies, immigration policies and community polices.