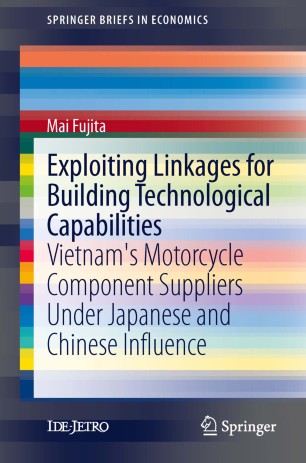 One of the key ingredients of success in building internationally competitive industries lies in amassing a sizeable pool of competent suppliers of parts, components and accessories. This monograph examines how in developing countries suppliers of mechanical components at the low end of the technological trajectory build up key capabilities over time. The focus is on Vietnam’s motorcycle industry, which was rapidly transformed from a small, highly protected market to the world’s fourth largest motorcycle producer. This rare success resulted from intense competition between leading Japanese motorcycle manufacturers and local Vietnamese assemblers of imported Chinese components both attempting to gain supremacy in the emerging market.

In particular, the book analyzes how local Vietnamese suppliers of motorcycle components exploited participation in contrasting types of value chains developed by the two groups of leading manufacturing firms, referred to here as Japanese and/or Vietnamese–Chinese chains, for accumulating strategic know-how. On the basis of historical evidence and recent empirical data collected through repeated rounds of in-depth fieldwork the analysis finds first, those suppliers’ learning trajectories evolved over time resulting in a divergence in learning performance extending across suppliers in later phases of industrial development. In the later stage, high-performing suppliers amassed basic innovative expertise, constituting the bedrock of this fast-growing industry. Second, the analysis finds that the diverging performance can be explained by the combination of roles played by lead firms in inducing and facilitating supplier learning and those of suppliers in mobilizing their own sources of knowledge. These conclusions not only provide dynamic, insightful accounts of supplier learning in developing country contexts but also make key theoretical and methodological contributions to the research on value chain participation and supplier learning.