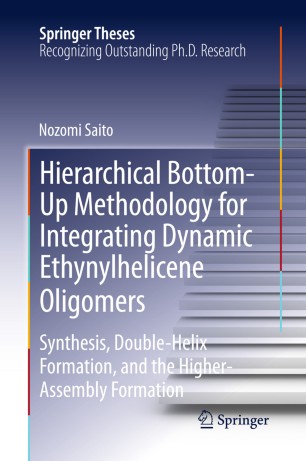 In biological systems, molecules hierarchically form ordered assemblies and macroscopic substances, as exemplified by the assembly of proteins. The development of such systems using oligomeric macromolecules obtained by organic synthesis can provide insights into biological phenomena and will lead to the creation of new materials. In this regard, synthetic double helix molecules are attractive subjects of study because they have an important structural motif  that appears widely in nature and can exhibit dynamic structural change. This thesis describes an unprecedented bottom-up approach using synthetic ethynylhelicene oligomers, which form dynamic double helices in organic media. Oligomer synthesis, homo- and hetero-double helix formation, and higher assembly formation due to intercomplex interactions are documented. The hierarchical assembly formation is a cogent reminder of the assembly of biological proteins that create living creatures. Also notable here is the demonstration of a methodology of providing diverse hetero-double helices and their higher assemblies by changing the combination of oligomers, which can be another advantage of this synthetic system.