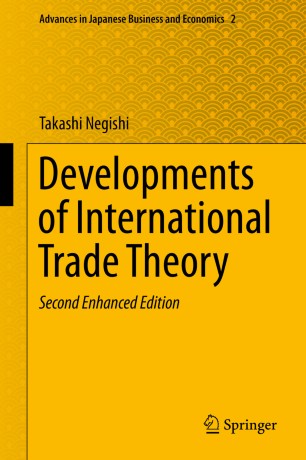 Part of the Advances in Japanese Business and Economics book series (AJBE, volume 2)

Developments of International Trade Theory offers the life-long reflections of a distinguished Japanese scholar who pioneered the application of general equilibrium theory to international trade. Written in a style that makes it easily accessible to scholars and students, the book combines standard topics on international trade with a discussion of the evolution of the theory and as well as recent discussions on topics such as immiserizing growth.

Taking advantage of the publication of this new edition, the author includes two new chapters, “Adam Smith and Disequilibrium Economic Theory” and “Complete Specialization in Classical Economics,” which readers will profit from reading after they have studied the basic theories of international trade in the main part of the book.

A member of the Japan Academy, professor emeritus of the University of Tokyo, former
president of the Econometric Society, and former president of The Japanese Society for the History of Economic Thought. Professor Negishi was awarded the Nikkei Prize for Economics Books in 1973, the Japan Academy Prize in 1993, the Order of the Sacred Treasure, Gold and Silver Star in 2008, and the Order of Culture in 2014.

Major journal articles include “Welfare Economics and Existence of an Equilibrium for a Competitive Economy” (Metroeconomica, June 12, 1960, 92–97) and “The Stability of a Competitive Economy: A Survey Article” (Econometrica Vol. 30, No. 4, Oct. 1962, pp. 635–669). Professor Negishi is the author of several books, including General Equilibrium Theory and International Trade (1972, North-Holland Publishing; Received the Nikkei Prize for Economics Books), History of Economic Theory (1989, North-Holland Publishing; Received the Japan Academy Prize), and Collected Essays of Takashi Negishi, three volumes (1994 and 2000, Edward Elgar Publishing Ltd.).

His major contributions range from general equilibrium theory and welfare economics (existence, optimality, and stability), theory of monopolistic competitions (kinked
demand curves), and micro foundations of Keynesian macroeconomics, to the history of
economics. For the details of these contributions, see the International Journal of
Economic Theory, Vol. 4, No. 2, June 2008: “A Special Issue on Social Welfare,
Market Equilibrium and Stability in Honor of Professor Takashi Negishi.”