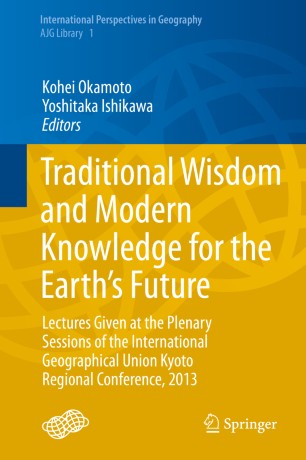 Traditional Wisdom and Modern Knowledge for the Earth’s Future

Lectures Given at the Plenary Sessions of the International Geographical Union Kyoto Regional Conference, 2013

The title of this book, Traditional Wisdom and Modern Knowledge for the Earth’s Future, is from the theme of the 2013 Kyoto Regional Conference of the International Geographical Union. Over the past few decades, globalization has strengthened connections among countries and regions of the world and has greatly changed existing geographies. However, this trend has also fostered various problems on a regional or global scale, such as economic imbalance, social fragmentation, political conflicts, and environmental crises. While acknowledging the world’s diversity, geography as a discipline must endeavor to resolve these problems by devising plans for cooperation and symbiotic existence of the different peoples of the world.
An old Japanese proverb, On-ko chi-shin, taken from a Chinese one, Wengu zhixin, says that only by exploring the old can one understand the new. People should first understand how traditional ideas, linked to interaction between society/culture and the environment, were formed in different countries and regions. Traditional wisdom, in harmony with the environment, remains prevalent. This book examines how we can mold the earth’s future through such traditional wisdom and modern knowledge from the nine keynote speeches of the Kyoto Regional Conference focusing on three topics: traditional wisdom, the environment, and the Great East Japan Earthquake.