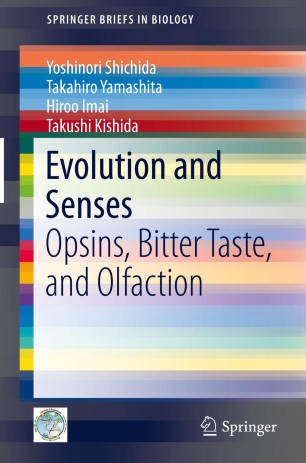 Part of the SpringerBriefs in Biology book series (BRIEFSBIOL)

This book focuses on sensing and the evolution of animals. Using the five senses (visual, auditory, and olfactory perception, and taste and touch), animals can receive environmental stimuli and respond to them. Changes in these sensitivities might cause changes in aspects of animals’ lives such as habitat, activity timing, and diet—and vice versa. Recent advances in genome and molecular analysis enable us to investigate certain changes in the receptors or mechanisms involved in sensing and provide clues for understanding the evolution of animals related to those changes. The first chapter deals with the molecular evolution of opsins. In addition to the well-known function of opsins as visual receptors, opsins can be related to non-visual photoreception such as photoentrainment of circadian rhythm, photoperiodism, and background adaptation. Molecular phylogenic studies reveal that all opsin genes have evolved from one ancient opsin gene. The evaluation of the functions of each extant opsin protein based on the molecular features enables us to predict the molecular evolution and diversification of opsins during the evolution of animals. These studies shed light on which amino-acid substitutions cause the functional diversification of opsins and how they have influenced the evolution of animals. The second chapter has to do with bitter taste perception, a key detection mechanism against the ingestion of bioactive substances. Genetic and behavioral evidence reveal the existence of "non-taster" Japanese macaques for specific bitter compounds, which originated in a restricted region of Japan. This finding might provide a clue for elucidating the ecological, evolutionary, and neurobiological aspects of bitter taste perception of primates. The third chapter presents an extreme example of the evolution of olfaction, namely, that fully aquatic amniotes have generally reduced their olfactory capacity considerably compared to their terrestrial relatives. Interestingly, the remaining olfactory abilities are quite different among three fully aquatic amniotes investigated: toothed whales have no nervous system structures that mediate olfaction, but baleen whales can smell in air, and it has been suggested that sea snakes smell underwater.