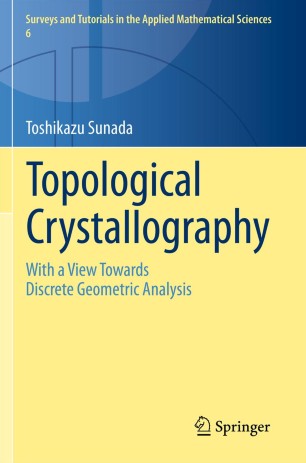 With a View Towards Discrete Geometric Analysis

Part of the Surveys and Tutorials in the Applied Mathematical Sciences book series (STAMS, volume 6)

Geometry in ancient Greece is said to have originated in the curiosity of mathematicians about the shapes of crystals, with that curiosity culminating in the classification of regular convex polyhedra addressed in the final volume of Euclid’s Elements. Since then, geometry has taken its own path and the study of crystals has not been a central theme in mathematics, with the exception  of Kepler’s work on snowflakes. Only in the nineteenth century did mathematics begin to play a role in crystallography as group theory came to be applied to the morphology of crystals.

This monograph follows the Greek tradition in seeking beautiful shapes such as regular convex polyhedra. The primary aim is to convey to the reader how algebraic topology is effectively used to explore the rich world of crystal structures. Graph theory, homology theory, and the theory of covering maps are employed to introduce the notion of the topological crystal which retains, in the abstract, all the information on the connectivity of atoms in the crystal. For that reason the title Topological Crystallography has been chosen.

Topological crystals can be described as “living in the logical world, not in space,” leading to the question of how to place or realize them “canonically” in space. Proposed here is the notion of standard realizations of topological crystals in space, including as typical examples the crystal structures of diamond and lonsdaleite. A mathematical view of

Applications of the discussions in this volume include not only a systematic enumeration of crystal structures, an area of considerable scientific interest for many years, but also the architectural design of lightweight rigid structures. The reader therefore can see the agreement of theory and practice.

“This book is unique in its coverage, and is therefore a necessary addition to the library of any mathematician working on mathematical or geometric crystallography particularly with respect to crystal design and engineering.” (G. L. McColm, MAA Reviews, April 05, 2019)