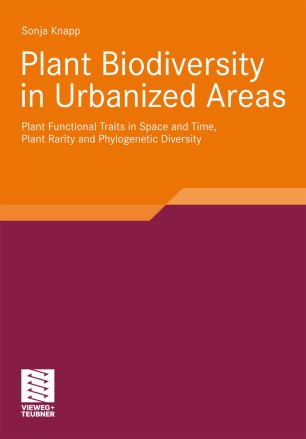 Urbanization is one of the main drivers of global change. It often takes place in areas with high biodiversity, threatening species worldwide. To protect biodiversity not only outside but also right within urban areas, knowledge about the effects of urban land use on species assemblages is essential.

Sonja Knapp compares several aspects of plant biodiversity between urban and rural areas in Germany. Using extensive databases and modern statistical methods, she goes beyond species richness: Urban areas are rich in species but plant species in urban areas are closer related to each other than plant species in rural areas, respectively. The urban environment, characterized by high temperatures and frequent disturbances, changes the functional composition of the flora. It promotes e.g. short-lived species with leaves adapted to drought but threatens insect-pollinated or wind-dispersed species. The author claims that the protection of biodiversity should not only focus on species richness but also on functional and phylogenetic diversity, also right within urban areas, to preserve a flora with a high potential for adaptation to changing global conditions.