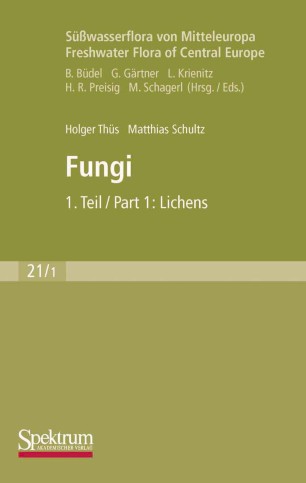 Volume 21 of the series "Süßwasserflora/Freshwater Flora of Central Europe" describes the aquatic fungi. The present Part 21/1 was published on 4. December 2008 and deals with freshwater lichens (symbiotic associations of a fungi with green algae or cyanobacteria), which can be found in most running water bodies with clean water and stable bedrocks. The freshwater lichen flora has a huge potential for bioindication of silting, bedrock stability, constancy of inundation and acidification.

With less than 100 species, freshwater lichens are a rather small and systematically highly heterogeneous group of specialized fungi, which convergently adopted an amphibious lifestyle. They are representatives of several non related orders of Ascomycota.

A comprehensive flora of Central European freshwater lichens was missing completely. This book is intended to fill that gap and to aid both the lichenologists as well as the non specialized environmentalist to efficiently and correctly identify European freshwater lichens. Detailed descriptions of all known amphibious taxa as well as photographs of most of the species are given. Keys include specialized freshwater species as well as a selection of taxa with a wide ecological amplitude, which are found at the borders of streams and lakes.