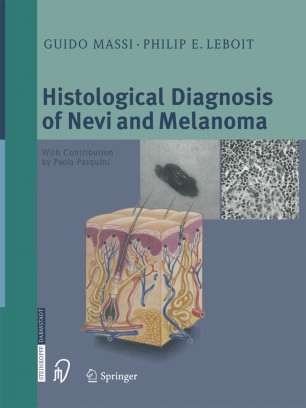 Histological Diagnosis of Nevi and Melanoma

The interpretation of melanocytic tumors represents one of the most impor­ tant topics and probably the most difficult challenge in the field of dermato­ pathology. For example, the evaluation of the so called nevoid (spitzoid) melanoma, Spitz's nevi with conflicting criteria, or some benign simulators of malignant melanoma can pose seemingly insurmountable diagnostic problems. A correct diagnosis is expected, because the implications are seri­ ous. The misreading of a section of a malignant melanoma as a nevus, which will then be left untreated, may result in regrowth at the biopsy site, may metastasize and lead to death. Whereas, overdiagnosis of Spitz's nevus may be followed by unnecessarily extensive surgery including lymph node dissection and, sometimes, immunotherapy and chemotherapy also. Melanocytic tumors are identified by clinical and histological criteria, with the later based on both architectural and cytomorphological features. A clear, comprehensive book on this subject can be of help to dermatopatholo­ gists, general pathologists, and dermatologists. Philip LeBoit and Guido Massi are particularly suited to deal with this task, because of their great experience. They have produced an impressive work that will be respected as a major teaching guide and diagnostic aid for melanoma and benign melanocytic lesions.