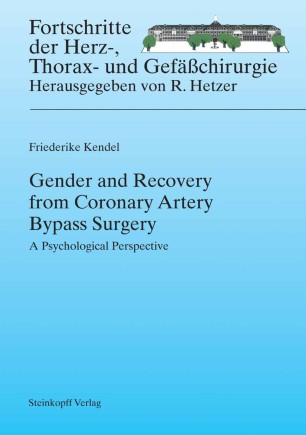 The number of coronary artery bypass graft (CABG) operations has increased continually over the past decade. To date, roughly one-third of these are performed on women. Despite the tremendous progress made in cardiovascular surgery, not all patients profit equally from it, and the mortality rate of women still exceeds that of men by a factor of two. Studies conducted to investigate this marked gender difference have yielded conflicting results. In particular, adjustment for clinical risk factors seemed to diminish the difference, but could not fully explain it.

Therefore psychosocial parameters, in particular depression and psychosocial stress, have gained increasing attention as predictors for both mortality and quality of life after CABG operation. Gender differences in these variables have long been observed in patients undergoing CABG: female patients are on average older, more often depressive and more often living alone than male patients. This book presents the very first German study to focus on these gender differences.

By describing the gender-specific influence of psychological and clinical variables on the recovery process, this work fills an important gap in cardiovascular research. Its approach is interdisciplinary in the best sense. The study underlines the importance of psychosocial variables for both mortality and quality of life in the context of CABG. Thus, it may be seen as a basis for a better understanding and treatment of CABG patients.