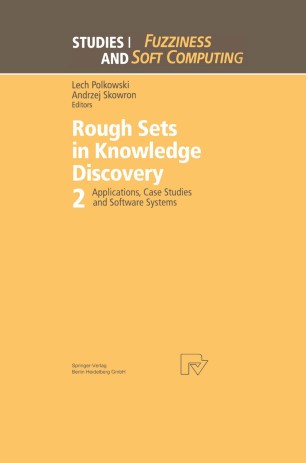 Part of the Studies in Fuzziness and Soft Computing book series (STUDFUZZ, volume 19)

The papers on rough set theory and its applications placed in this volume present a wide spectrum of problems representative to the present. stage of this theory. Researchers from many countries reveal their rec.ent results on various aspects of rough sets. The papers are not confined only to mathematical theory but also include algorithmic aspects, applications and information about software designed for data analysis based on this theory. The volume contains also list of selected publications on rough sets which can be very useful to every one engaged in research or applications in this domain and sometimes perhaps unaware of results of other authors. The book shows that rough set theory is a vivid and vigorous domain with serious results to its credit and bright perspective for future developments. It lays on the crossroads of fuzzy sets, theory of evidence, neural networks, Petri nets and many other branches of AI, logic and mathematics. These diverse connec­ tions seem to be a very fertile feature of rough set theory and have essentially contributed to its wide and rapid expansion. It is worth mentioning that its philosophical roots stretch down from Leibniz, Frege and Russell up to Popper. Therefore many concepts dwelled on in rough set theory are not entirely new, nevertheless the theory can be viewed as an independent discipline on its own rights. Rough set theory has found many interesting real life applications in medicine, banking, industry and others.