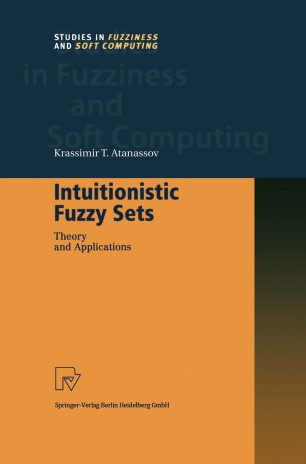 Part of the Studies in Fuzziness and Soft Computing book series (STUDFUZZ, volume 35)

In the beginning of 1983, I came across A. Kaufmann's book "Introduction to the theory of fuzzy sets" (Academic Press, New York, 1975). This was my first acquaintance with the fuzzy set theory. Then I tried to introduce a new component (which determines the degree of non-membership) in the definition of these sets and to study the properties of the new objects so defined. I defined ordinary operations as "n", "U", "+" and "." over the new sets, but I had began to look more seriously at them since April 1983, when I defined operators analogous to the modal operators of "necessity" and "possibility". The late George Gargov (7 April 1947 - 9 November 1996) is the "god­ father" of the sets I introduced - in fact, he has invented the name "intu­ itionistic fuzzy", motivated by the fact that the law of the excluded middle does not hold for them. Presently, intuitionistic fuzzy sets are an object of intensive research by scholars and scientists from over ten countries. This book is the first attempt for a more comprehensive and complete report on the intuitionistic fuzzy set theory and its more relevant applications in a variety of diverse fields. In this sense, it has also a referential character.