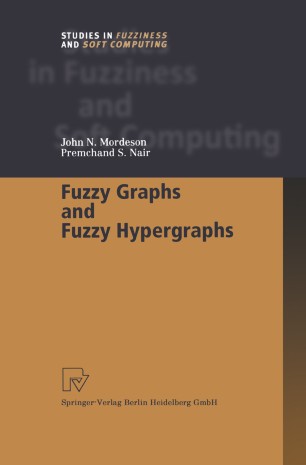 Part of the Studies in Fuzziness and Soft Computing book series (STUDFUZZ, volume 46)

In the course of fuzzy technological development, fuzzy graph theory was identified quite early on for its importance in making things work. Two very important and useful concepts are those of granularity and of nonlinear ap­ proximations. The concept of granularity has evolved as a cornerstone of Lotfi A.Zadeh's theory of perception, while the concept of nonlinear approx­ imation is the driving force behind the success of the consumer electronics products manufacturing. It is fair to say fuzzy graph theory paved the way for engineers to build many rule-based expert systems. In the open literature, there are many papers written on the subject of fuzzy graph theory. However, there are relatively books available on the very same topic. Professors' Mordeson and Nair have made a real contribution in putting together a very com­ prehensive book on fuzzy graphs and fuzzy hypergraphs. In particular, the discussion on hypergraphs certainly is an innovative idea. For an experienced engineer who has spent a great deal of time in the lab­ oratory, it is usually a good idea to revisit the theory. Professors Mordeson and Nair have created such a volume which enables engineers and design­ ers to benefit from referencing in one place. In addition, this volume is a testament to the numerous contributions Professor John N. Mordeson and his associates have made to the mathematical studies in so many different topics of fuzzy mathematics.