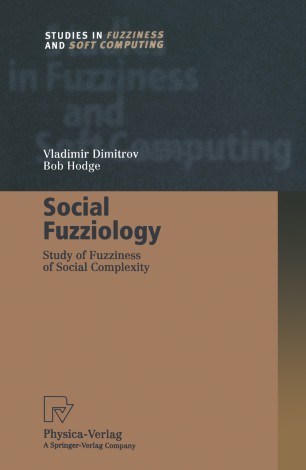 Study of Fuzziness of Social Complexity

Part of the Studies in Fuzziness and Soft Computing book series (STUDFUZZ, volume 107)

Fuzziology studies the fuzziness inherent in what we know about ourselves, the sources and nature of our experience, our thoughts and feelings, drives for understanding and urges to create and realise our potential. This kind of fuzziness is at the core of our existence, at the essence of our humanness. It affects any field of human activity, be it mathematical study of fuzzy equations and fuzzy integrals; engineering design and implementation of fuzzy logic-based methodologies; fuzzy control systems or fuzzy robots. Social fuzziology investigates the role of fuzziness in understanding the dynamic complexity of human existence in the social world. It is a study of the nexus between the complex demands of life -individual and social -and the fuzziness of thinking. Since human evolution over 2 billion years has seen the co-evolution of social complexity with human language and thought, it is likely that the fuzziness of language and thought is especially intimately formed by the demands of social complexity, just as social complexity is sustained by the inherent fuzziness of language and thought. Social fuzziology is not simply one field of application of fuzziology. Given the initial state of the development of fuzziology, social fuzziology needs to develop hand in hand with fuzziology, each helping to advance the other.