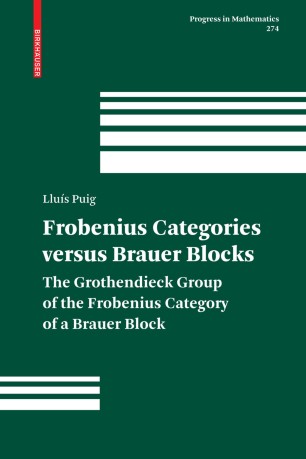 The Grothendieck Group of the Frobenius Category of a Brauer Block

Part of the Progress in Mathematics book series (PM, volume 274)

This book contributes to important questions in the representation theory of finite groups over fields of positive characteristic — an area of research initiated by Richard Brauer sixty years ago with the introduction of the blocks of characters. On the one hand, it introduces and develops the abstract setting of the Frobenius categories — also called the Saturated fusion systems in the literature — created by the author fifteen years ago for a better understanding of what was loosely called the local theory of a finite group around a prime number p or, later, around a Brauer block, and for the purpose of an eventual classification — a reasonable concept of simple Frobenius category arises.

On the other hand, the book develops this abstract setting in parallel with its application to the Brauer blocks, giving the detailed translation of any abstract concept in the particular context of the blocks. One of the new features in this direction is a framework for a deeper understanding of one of the central open problems in modular representation theory, known as Alperin’s Weight Conjecture (AWC). Actually, this new framework suggests a more general form of AWC, and a significant result of the book is a reduction theorem of this form of AWC to quasi-simple groups.

Although this book is a research monograph, all the arguments are widely developed to make it accessible to the interested graduate students and, at the same time, to put them on the verge of the research on this new subject: the third part of the book on the localities associated to a Frobenius category gives some insight on the open question about the existence and the uniquenes of a perfect locality — also called centric linking system in the literature. We have developed a long introduction to explain our purpose and to provide a guideline for the reader throughout the twenty four sections. A systematic appendix on the cohomology of categories completes the book.

“The concept of Frobenius category (also called saturated fusion system) has been developed by Lluis Puig many years ago. … This volume is a research monograph containing many original results which appear for the first time in print … . The book ends with Appendix developing the author’s point of view on cohomology of small categories. … the book is a necessary tool for any researcher in the field.” (Andrei Marcus, Studia Universitatis Babes-Bolyai, Mathematica, Vol. LV (4), December, 2010)

“In recent years a new concept–called Frobenius category by Puig and fusion system by others–has become very successful in the representation theory of finite groups. … the book gives an account of the early developments and definitions presented by Puig, as they were given in his first manuscripts. This certainly is of great importance because it makes the first, original definitions of Puig accessible to a wide audience.”­­­ (Alexander Zimmermann, Mathematical Reviews, Issue 2010 j)