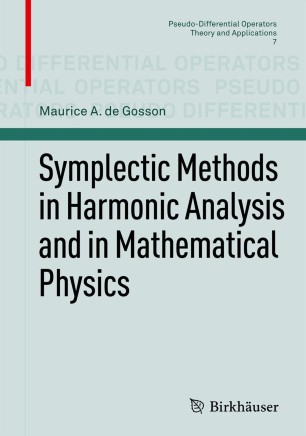 Symplectic Methods in Harmonic Analysis and in Mathematical Physics

The aim of this book is to give a rigorous and complete treatment of various topics from harmonic analysis with a strong emphasis on symplectic invariance properties, which are often ignored or underestimated in the time-frequency literature. The topics that are addressed include (but are not limited to) the theory of the Wigner transform, the uncertainty principle (from the point of view of symplectic topology), Weyl calculus and its symplectic covariance, Shubin’s global theory of pseudo-differential operators, and Feichtinger’s theory of modulation spaces. Several applications to time-frequency analysis and quantum mechanics are given, many of them concurrent with ongoing research. For instance, a non-standard pseudo-differential calculus on phase space is introduced and studied, where the main role is played by “Bopp operators” (also called “Landau operators” in the literature). This calculus is closely related to both the Landau problem and to the deformation quantization theory of Flato and Sternheimer, of which it gives a simple pseudo-differential formulation where Feichtinger’s modulation spaces are key actors.

This book is primarily directed towards students or researchers in harmonic analysis (in the broad sense) and towards mathematical physicists working in quantum mechanics. It can also be read with profit by researchers in time-frequency analysis, providing a valuable complement to the existing literature on the topic. A certain familiarity with Fourier analysis (in the broad sense) and introductory functional analysis (e.g. the elementary theory of distributions) is assumed. Otherwise, the book is largely self-contained and includes an extensive list of references.