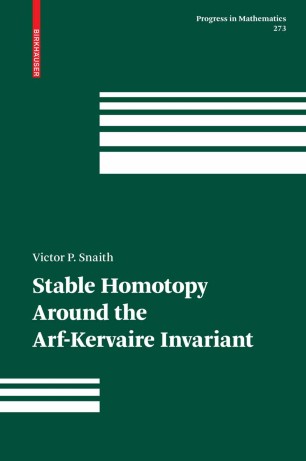 Stable Homotopy Around the Arf-Kervaire Invariant

Part of the Progress in Mathematics book series (PM, volume 273)

Were I to take an iron gun, And ?re it o? towards the sun; I grant ‘twould reach its mark at last, But not till many years had passed. But should that bullet change its force, And to the planets take its course, ‘Twould never reach the nearest star, Because it is so very far. from FACTS by Lewis Carroll [55] Let me begin by describing the two purposes which prompted me to write this monograph. This is a book about algebraic topology and more especially about homotopy theory. Since the inception of algebraic topology [217] the study of homotopy classes of continuous maps between spheres has enjoyed a very exc- n n tional, central role. As is well known, for homotopy classes of maps f : S ?? S with n? 1 the sole homotopy invariant is the degree, which characterises the homotopy class completely. The search for a continuous map between spheres of di?erent dimensions and not homotopic to the constant map had to wait for its resolution until the remarkable paper of Heinz Hopf [111]. In retrospect, ?nding 3 an example was rather easy because there is a canonical quotient map from S to 3 1 1 2 theorbitspaceofthe freecircleactionS /S =CP = S .