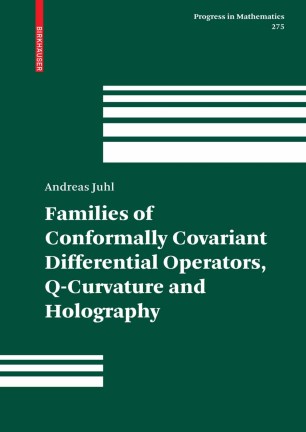 Part of the Progress in Mathematics book series (PM, volume 275)

The central object of the book is a subtle scalar Riemannian curvature quantity in even dimensions which is called Branson’s Q-curvature. It was introduced by Thomas Branson about 15 years ago in connection with an attempt to systematise the structure of conformal anomalies of determinants of conformally covariant differential operators on Riemannian manifolds. Since then, numerous relations of Q-curvature to other subjects have been discovered, and the comprehension of its geometric significance in four dimensions was substantially enhanced through the studies of higher analogues of the Yamabe problem.

The book attempts to reveal some of the structural properties of Q-curvature in general dimensions. This is achieved by the development of a new framework for such studies. One of the main properties of Q-curvature is that its transformation law under conformal changes of the metric is governed by a remarkable linear differential operator: a conformally covariant higher order generalization of the conformal Laplacian. In the new approach, these operators and the associated Q-curvatures are regarded as derived quantities of certain conformally covariant families of differential operators which are naturally associated to hypersurfaces in Riemannian manifolds. This method is at the cutting edge of several central developments in conformal differential geometry in the last two decades such as Fefferman-Graham ambient metrics, spectral theory on Poincaré-Einstein spaces, tractor calculus, and Cartan geometry. In addition, the present theory is strongly inspired by the realization of the idea of holography in the AdS/CFT-duality. This motivates the term holographic descriptions of Q-curvature.

“The author focuses this book on the … Q-curvature and its relations with the conformal differential geometry. … This beautiful and interesting research book covers a new topic in Riemannian differential geometry that intersects many areas of the actual research in Mathematics and in Mathematical Physics. Thus it can be highly recommended to all Mathematicians … .” (Agostino Prástaro, Zentralblatt MATH, Vol. 1177, 2010)
Buy options