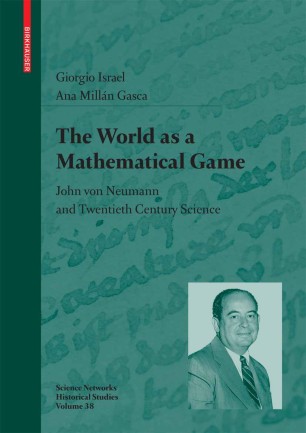 The World as a Mathematical Game

Galileo and Newton’s work towards the mathematisation of the physical world; Leibniz’s universal logical calculus; the Enlightenment’s mathématique sociale. John von Neumann inherited all these aims and philosophical intuitions, together with an idea that grew up around the Vienna Circle of an ethics in the form of an exact science capable of guiding individuals to make correct decisions. With the help of his boundless mathematical capacity, von Neumann developed a conception of the world as a mathematical game, a world globally governed by a universal logic in which individual consciousness moved following different strategies: his vision guided him from set theory to quantum mechanics, to economics and to his theory of automata (anticipating artificial intelligence and cognitive science).

Von Neumann became a true legend in twentieth century science; but he was also a controversial figure, because of the decisive role he played in determining US military policy and strategic atomic equilibrium – which he viewed as an application of game theory. The Cold War is over; the age of nuclear physics and big science has been superseded by our age of biotechnology and postacademic science. From the life of John von Neumann emerge important insights to understand the cultural and technological landscape that we have inherited from the past century. This book provides the first comprehensive scientific and intellectual biography of John von Neumann, a man who perhaps more than any other is representative of twentieth century science.

There are hundreds of metaphors for life: Life is a vale of tears, a dream, a joke. In As You Like It, Shakespeare says that life is a stage. What was von Neumann's metaphor? […] it was that life is a game. Sensitive to the double-edged sword of knowledge and the idiocy of mankind, von Neumann's main legacy might be the deepening of the ancient dilemma of Prometheus.

“Giorgio Israel and Ana Millán Gasca have written a highly readable account of the life and work of John von Neumann. … the book presents an insightful synthesis of the many fields of scientific and public activity of this unique genius. … The book is intended for a nonspecialized readership. … anyone with an interest in the history of science in the twentieth century is certainly advised to read this excellent book.” (Leo Corry, ISIS, Vol. 102 (1), March, 2011)

“The world as a mathematical game presents an extensive professional biography of John von Neumann. … Overall, the authors present a very detailed analysis of the mathematical and scientific accomplishments of von Neumann and place his contributions in context with those of other noted mathematicians and scientists. The book is certainly recommended for anyone interested in learning more about the scientific pursuits of von Neumann and offers an interesting analysis of his views and motivations.” (Thomas Philip Wakefield, Mathematical Reviews, Issue 2011 f)

“All the most important features of von Neumann’s impact on 20th-century economics – from the spread of the axiomatic method to the popularization of several analytical techniques to the idea itself of ‘modelization’ as the only proper way to investigate economic phenomena … it follows that this book is a real boon, as well as a must-read, for every historian or economist wishing to understand how, and by whom, modern neoclassical economics has been shaped in the first two or three decades after World War II.” (Nicola Giocoli, History of Economic Ideas, Vol. 18 (1), 2010)

“The World as a Mathematical Game says that the book ‘provides the first comprehensive scientific and intellectual biography of John von Neumann’. It covers the ground well and thoroughly in 175 pages of text, moving chronologically through his astonishing career. … The authors have written their book for a general audience. … In any event, it is good to have this outline of von Neumann’s work.” (Underwood Dudley, The Mathematical Association of America, October, 2009)