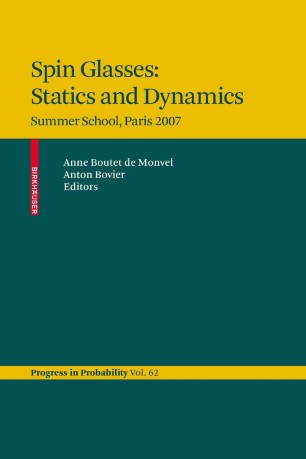 Part of the Progress in Probability book series (PRPR, volume 62)

Over the last decade, spin glass theory has turned from a fascinating part of t- oretical physics to a ?ourishing and rapidly growing subject of probability theory as well. These developments have been triggered to a large part by the mathem- ical understanding gained on the fascinating and previously mysterious “Parisi solution” of the Sherrington–Kirkpatrick mean ?eld model of spin glasses, due to the work of Guerra, Talagrand, and others. At the same time, new aspects and applications of the methods developed there have come up. The presentvolumecollects a number of reviewsaswellas shorterarticlesby lecturers at a summer school on spin glasses that was held in July 2007 in Paris. These articles range from pedagogical introductions to state of the art papers, covering the latest developments. In their whole, they give a nice overview on the current state of the ?eld from the mathematical side. The review by Bovier and Kurkova gives a concise introduction to mean ?eld models, starting with the Curie–Weiss model and moving over the Random Energymodels up to the Parisisolutionof the Sherrington–Kirkpatrikmodel. Ben Arous and Kuptsov present a more recent view and disordered systems through the so-called local energy statistics. They emphasize that there are many ways to look at Hamiltonians of disordered systems that make appear the Random Energy model (or independent random variables) as a universal mechanism for describing certain rare events. An important tool in the analysis of spin glasses are correlation identities.