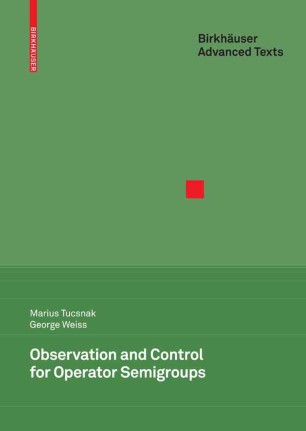 Observation and Control for Operator Semigroups

“This book deals with the observation and control of linear systems described by semigroups of operators in Hilbert spaces. … In particular, in this book the authors are able to use their ideas to establish the exact observability or exact controllability of various systems. … The book is written in an appropriate style for graduate students, mathematicians with interests in control theory and, also, researchers in control engineering.” (Enrique Fernández Cara, Mathematical Reviews, Issue 2010 d)

“This book, written at the level of a graduate textbook, is devoted to observation and control operators for operator semigroups. … provide a self-contained introduction into the topics admissibility, observability and controllability. … Each chapter concludes with a section containing bibliographic notes and further results. … In summary, the book is a welcome addition to infinite-dimensional systems theory. The book is suitable for researchers in other areas who wish to enter the field and also for specialists in the field as a general reference.” (Birgit Jacob, Zentralblatt MATH, Vol. 1188, 2010)

“This book is an introduction for applied mathematics and control graduate students and researchers interested in systems whose dynamics can be described by an operator semigroup on a Hilbert space. The book aims to unify two traditionally different approaches, one using abstract functional analysis and the other based on partial differential equation techniques such as multipliers, Ingham-Beurling-type inequalities, and Carleman estimates.” (IEEE Control Systems Magazine, Vol. 30, June, 2010)