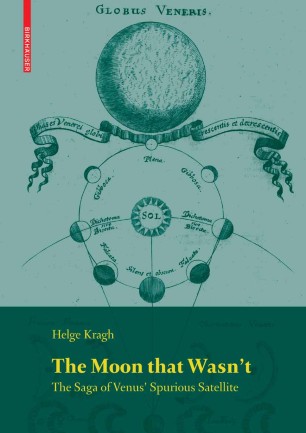 The Moon that Wasn’t

The Saga of Venus’ Spurious Satellite

This book details the history of one of astronomy’s many spurious objects, the satellite of Venus. First spotted in 1645, the non-existing moon was observed more than a dozen times until the late eighteenth century. Although few astronomers believed in the existence of the moon after about 1770, it continued to attract attention for at least another century. However, it has largely disappeared from the history of astronomy, and the rich historical sources have never been exploited. By telling the story of the enigmatic satellite in its proper historical context it is demonstrated that it was much more than a mere curiosity in the annals of astronomy – Frederick II of Prussia was familiar with it, and so was Bonnet, Kant and Voltaire. The satellite of Venus belongs to the same category as other fictitious celestial bodies (such as the planet Vulcan), yet it had its own life and fascinating historical trajectory. By following this trajectory, the history of planetary astronomy is addressed in a novel way.

“The moon that wasn’t makes the reader aware of how the idea of a Venusian satellite retained its attractiveness not only in science but also in society … . well-produced, clearly organized, and supported by useful illustrations … and an extensive bibliography. … Helge Kragh must be congratulated for writing a solid historical study that portrays lesser known, second- or even third-rate astronomical researches and for offering … new case studies for philosophers of science to ponder.” (Jarosław Włodarczyk, Journal for the History of Astronomy, November, 2010)

“This book is an account of certain peculiar telescopic observations from the 1640s through the 1760s, and of the interpretations of them during this early period and later. … Kragh’s endeavor in this book is to give an account of the Venus-moon affair that is as complete as possible. His examination of the literature has been extensive … . He provides an extensive bibliography, identifying the many primary sources which he has consulted. He includes biographical sketches of the 23 chief characters in his story.” (Curtis Wilson, Aestimatio: Critical Reviews in the History of Science, Issue 8, 2011)

“The Moon That Wasn’t comprehensively reviews the literature relating to the search. … Kragh rigorously supports his narrative by extensive footnotes and references, and includes biographical summaries for two dozen of the prominent individuals associated with the controversy. … this volume contains extensive material of interest to historians … . Summing Up … . Professional and academic historians of science; general readers.” (D. E. Hogg, Choice, Vol. 46 (9), May, 2009)