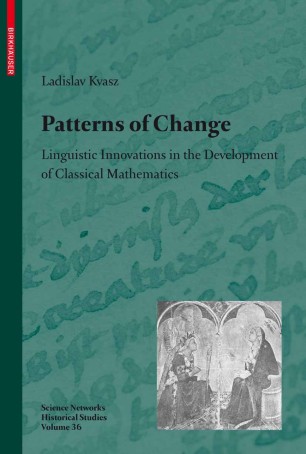 Linguistic Innovations in the Development of Classical Mathematics

One of these patterns of change, called a re-coding, generates two developmental lines. The first of them connecting arithmetic, algebra, differential and integral calculus and predicate calculus led to a gradual increase of the power of our calculating tools, turning difficult problems of the past into easy exercises. The second developmental line connecting synthetic geometry, analytic geometry, fractal geometry, and set theory led to a sophistication of the ways we construct geometrical objects, altering our perception of form and increasing our sensitivity to complex visual patterns.

Another important pattern of change, called relativization, is illustrated by the development of synthetic geometry, connecting Euclid’s geometry, projective geometry, non-Euclidean geometry, and Klein’s Erlanger Programm up to Hilbert’s Grundlagen der Geometrie. In this development the notions of space and geometric object underwent deep and radical changes culminating in the liberation of objects from the supremacy of space and so bringing to existence geometric objects which space would never tolerate.

The book offers tools of analysis by means of which scholars and students of the history and philosophy of mathematics can attain better understanding of the various changes, which the subject of their study underwent in the course of history. The book brings also important insights for mathematics education connecting growth of language with the development of mathematical thought.

“This is a book on the history and philosophy of mathematics interpreted as a sequence of linguistic innovations. … Kvasz has succeeded in producing a book which synthesizes over a quarter of century of his contributions to a linguistic approach to the history and philosophy of mathematics. The book should prove of interest not only to mathematicians. It suggests new directions for the analysis of changes … resulting from cultural encounters. … The book also has explicit references … to obstacles in mathematics education.” (U. D’Ambrosio, Mathematical Reviews, Issue 2009 k)

“In this book the author expounds his ‘linguistic approach’ for reconstructing the development of mathematical disciplines from a philosophical and historical point of view. … Kvasz’ approach provides an interesting tool for philosophers and historians which should be further discussed and applied.” (Hans Fischer, Zentralblatt MATH, Vol. 1153, 2009)