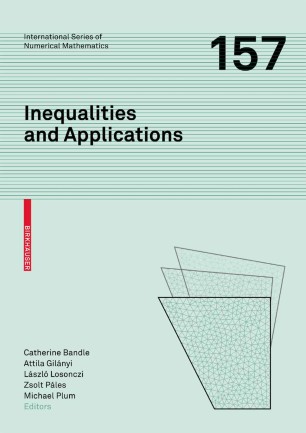 Inequalities continue to play an essential role in mathematics. Perhaps, they form the last field comprehended and used by mathematicians in all areas of the discipline. Since the seminal work Inequalities (1934) by Hardy, Littlewood and Pólya, mathematicians have laboured to extend and sharpen their classical inequalities. New inequalities are discovered every year, some for their intrinsic interest whilst others flow from results obtained in various branches of mathematics. The study of inequalities reflects the many and various aspects of mathematics. On one hand, there is the systematic search for the basic principles and the study of inequalities for their own sake. On the other hand, the subject is the source of ingenious ideas and methods that give rise to seemingly elementary but nevertheless serious and challenging problems. There are numerous applications in a wide variety of fields, from mathematical physics to biology and economics.

This volume contains the contributions of the participants of the Conference on Inequalities and Applications held in Noszvaj (Hungary) in September 2007. It is conceived in the spirit of the preceding volumes of the General Inequalities meetings held in Oberwolfach from 1976 to 1995 in the sense that it not only contains the latest results presented by the participants, but it is also a useful reference book for both lecturers and research workers. The contributions reflect the ramification of general inequalities into many areas of mathematics and also present a synthesis of results in both theory and practice.